An average fixed cost (AFC) defines how much it costs to manufacture one unit. It helps measure the breakeven point of a certain company and analyze the expenses of a business and reduce them to make a business more beneficial.

Why is calculating an average fixed cost important?

Different brands sell their goods or services at a certain fixed price. To set those prices, entrepreneurs have to be aware of the number of funds spent on production and estimate a profit margin by using formulas of fixed and variable costs. Companies use the AFC formula for several reasons:

Investors and entrepreneurs can’t understand the whole picture of the company’s performance just by looking at the costs. To know more, for example, how a certain business operates, you need to look at the relation between the fixed costs and the number of manufactured goods. You need to divide these two measures to obtain the average fixed cost. This will help you define the efficiency of production and the economies of scale (the financial benefits your company can reap).

Salaries of permanent workers, payments for plants and equipment are fixed costs. Companies can’t operate without paying for equipment and appropriate building. The number of units you need to produce you should define by yourself.

So, with the help of this calculation, you can find out the number of funds you should allocate to produce one unit. Let’s find out how to estimate this cost.

How to calculate an average fixed cost?

To estimate an average fixed cost for a business, you can use two different methods. Further, we’ll discuss each of them in more detail.

In case you want to define how the fixed costs per unit are influenced by the fixed costs, it’s advisable to use the division method. Firstly, you need to determine the time frame since fixed costs are estimated over a set period. It enables you to figure out when you’ll start breaking even and obtaining a profit.

Below you can see the AFC formula. 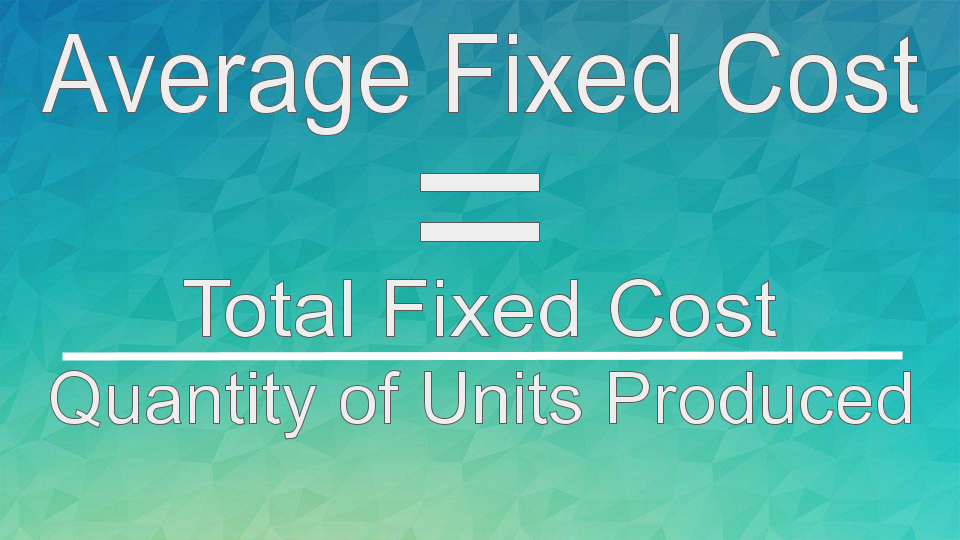 Below you can see the necessary formulas to estimate these measures. 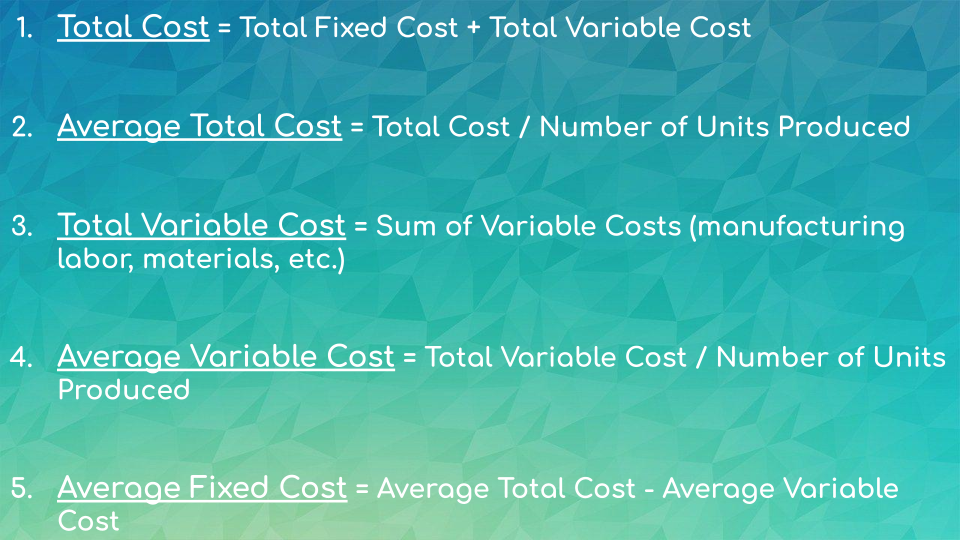 If you need these calculations, choose one of the methods that suit you the most. Now let’s proceed to the differences between average fixed and average variable cost.

The average fixed cost is the cost required to manufacture one unit. This cost decreases as the number of goods produced increases. This is because the same amount of fixed costs needs to be spent to produce a larger number of units. You can calculate the cost this way: divide the sum of all fixed costs by the number of manufactured units.

By calculating this measure, you have the opportunity to analyze your firm's expenses and to reduce them, and identify the point where your business begins to generate revenue. The cost helps you find out the information necessary for your production decisions. If you want to maximize your revenue, it’s critical to control this cost. You should know how it changes when there’s a change in the quantity.

Average variable cost (AVC) is a sum of all variable costs divided by the number of goods produced. It is a critical factor for a company to decide whether it’s worth continuing the production of its goods. A company can continue only if the marginal revenue is bigger than AVC.

If the average revenue of a company is lower than AVC, it would be better to shut down this business. This is since manufacturing anything wouldn’t help to obtain profit big enough to offset the variable costs of the production, minimal production would also add losses to this firm. So the company prefers to stop operating and lose only fixed costs.

On the other hand, when a business obtains costs bigger than the AVC, it can cover some of the expenses, among them all variable costs and some of the fixed costs. Fixed costs aren’t influenced by production. For example, the amount of money you pay to rent a space for your business. For sure, it doesn’t change when the number of units you decide to produce changes. As long as your revenue is higher than the AVC, you can continue to produce your goods.

Let’s move to the next part to review several examples and understand how to accurately estimate this measure.

Let’s imagine that there is a company engaged in the cultivation of coffee. The firm’s team has hired five permanent employees and has to pay $5,000 per annum to each worker. Besides, they have to pay for the necessary equipment $70,000 per annum. It also spends $15,000 to rent a building to store coffee. The company’s total output is 1000 tons. So now let’s estimate the average fixed cost.

So, with the help of the formula, we were able to calculate the AFC for this coffee company.

Let's look at another example, a company that manufactures sneakers. If the quantity of the output varies from 7 to 12 pairs of running shoes, the fixed cost would be $49. To estimate the AFC, you need to divide $49 by 7 sneakers. It would be 7. Simply put, to manufacture 7 pairs of sneakers, you need to spend $49 (fixed cost) and obtain a pair of shoes that would cost $7.

To sum it up, AFC enables entrepreneurs or investors to find out the number of funds necessary to produce one unit. It helps you define the breakeven point of a business.

Your password must be between 8 and 48 characters long, contain at least one uppercase letter, one lowercase letter, and a number.

Your promo-code is invalid

Looks like you already have an account. Please email us at support@sendpulse.com if you think this is en error.