How to View CRM Statistics

With the help of a CRM dashboard, you can view aggregated visual representations of information on all your pipelines, deals, and team members to monitor and analyze work efficiency.

To view statistics, click on "CRM" in the top panel or on "Dashboard" in the left panel. 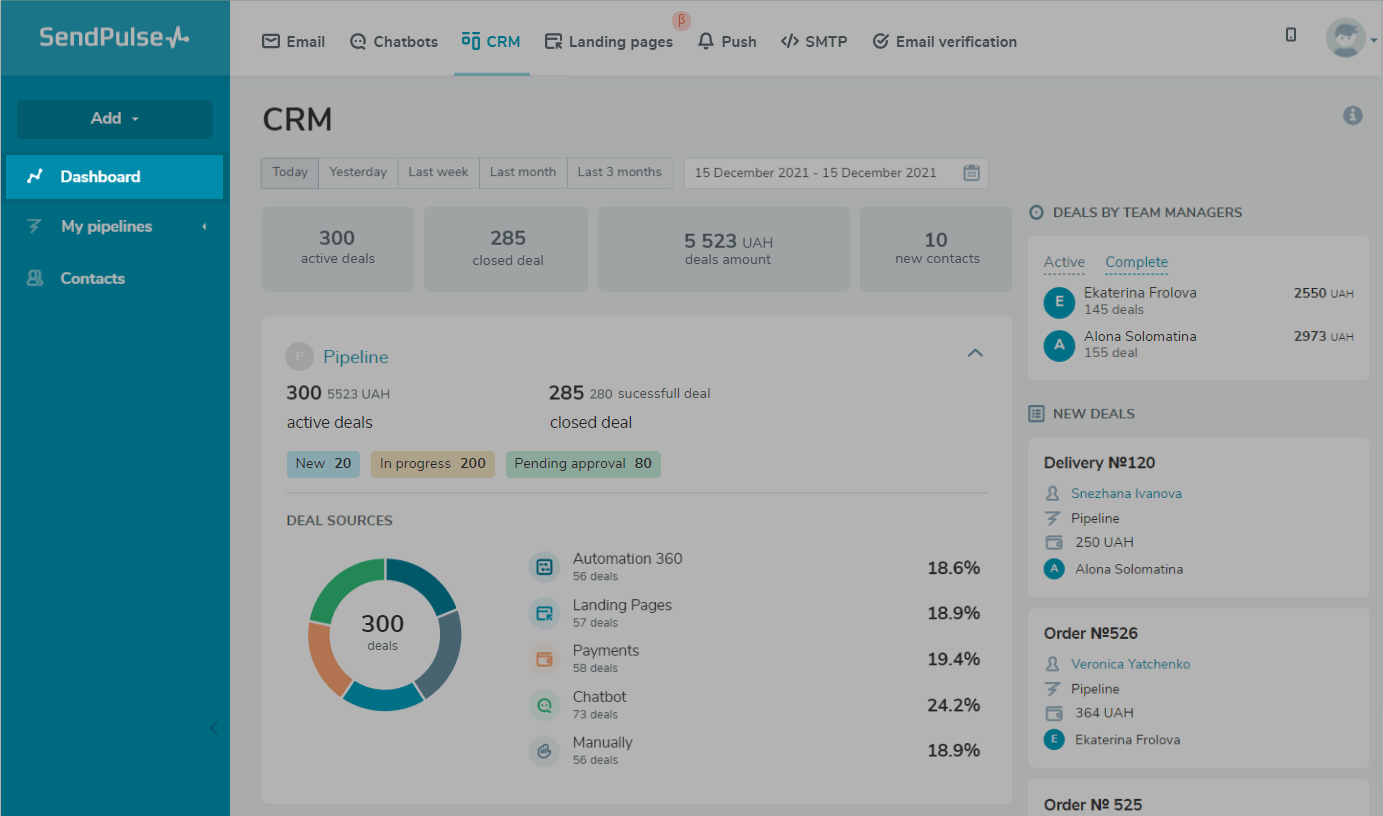 Select the period you want to display statistics for all indicators on the page. You can select statistics for the current day, the previous day, the last week, month, quarter, or set dates. 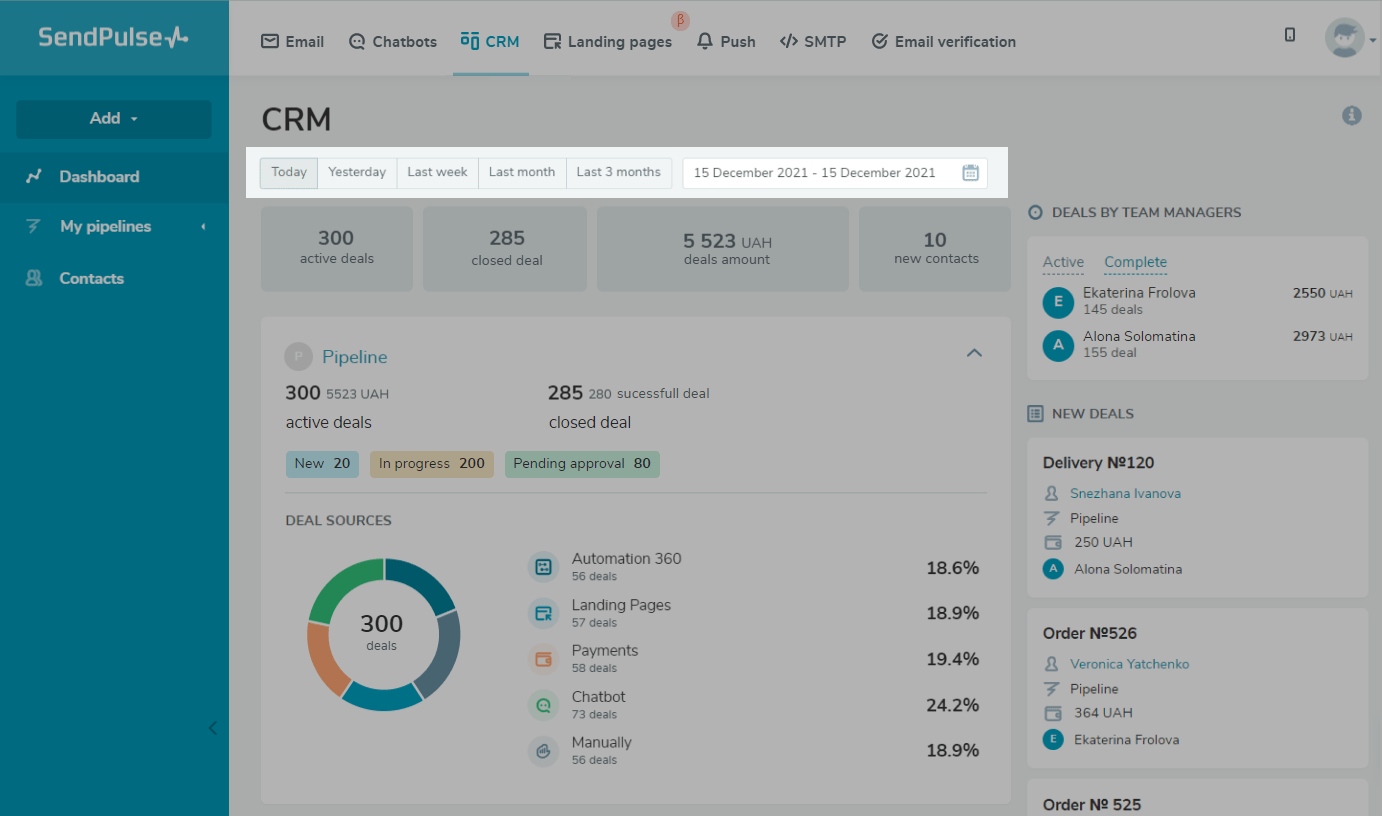 This section shows the total number of active and closed deals, the number of contacts added, and the number of deals for the selected period for all pipelines. 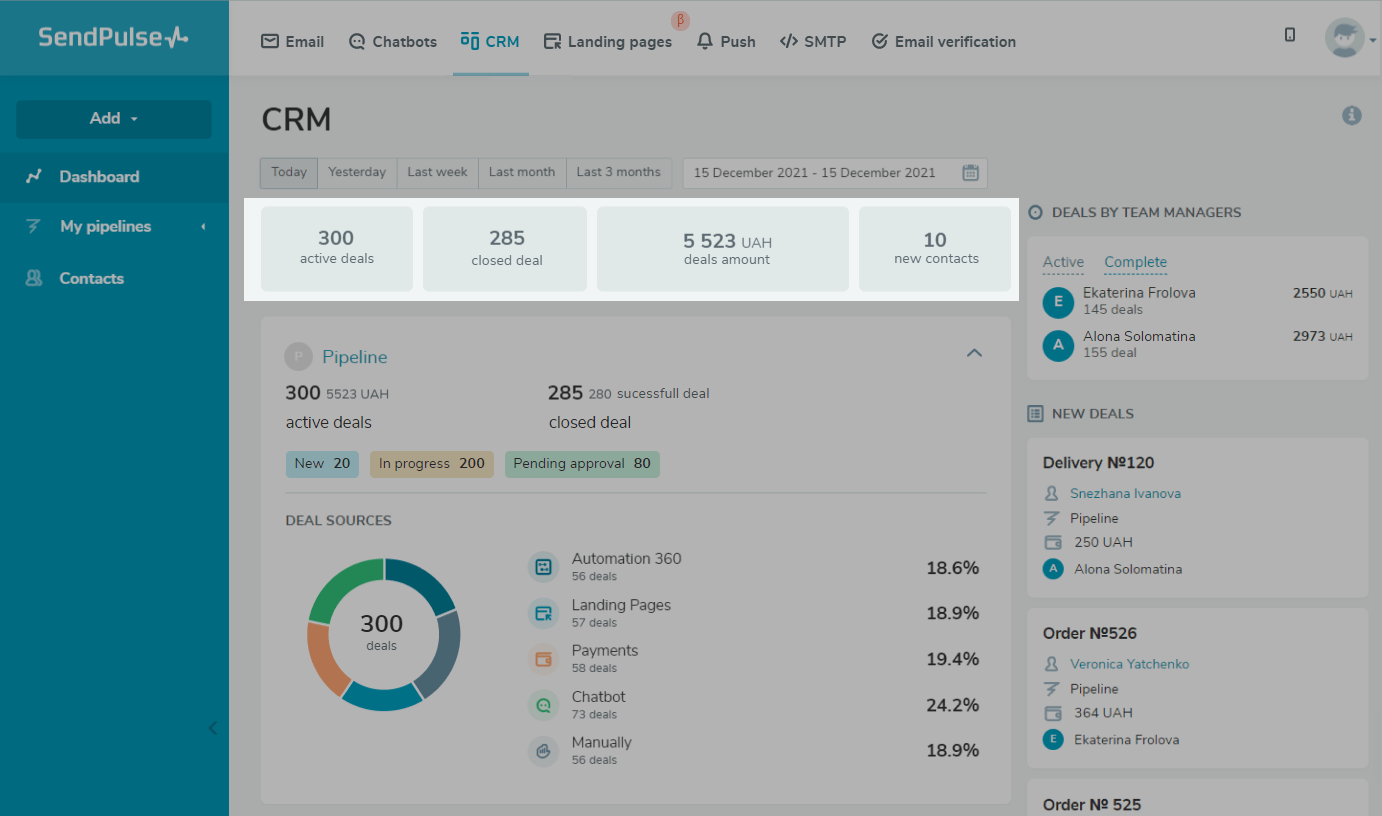 Below, the total number and sum of active and closed deals is displayed for each pipeline. 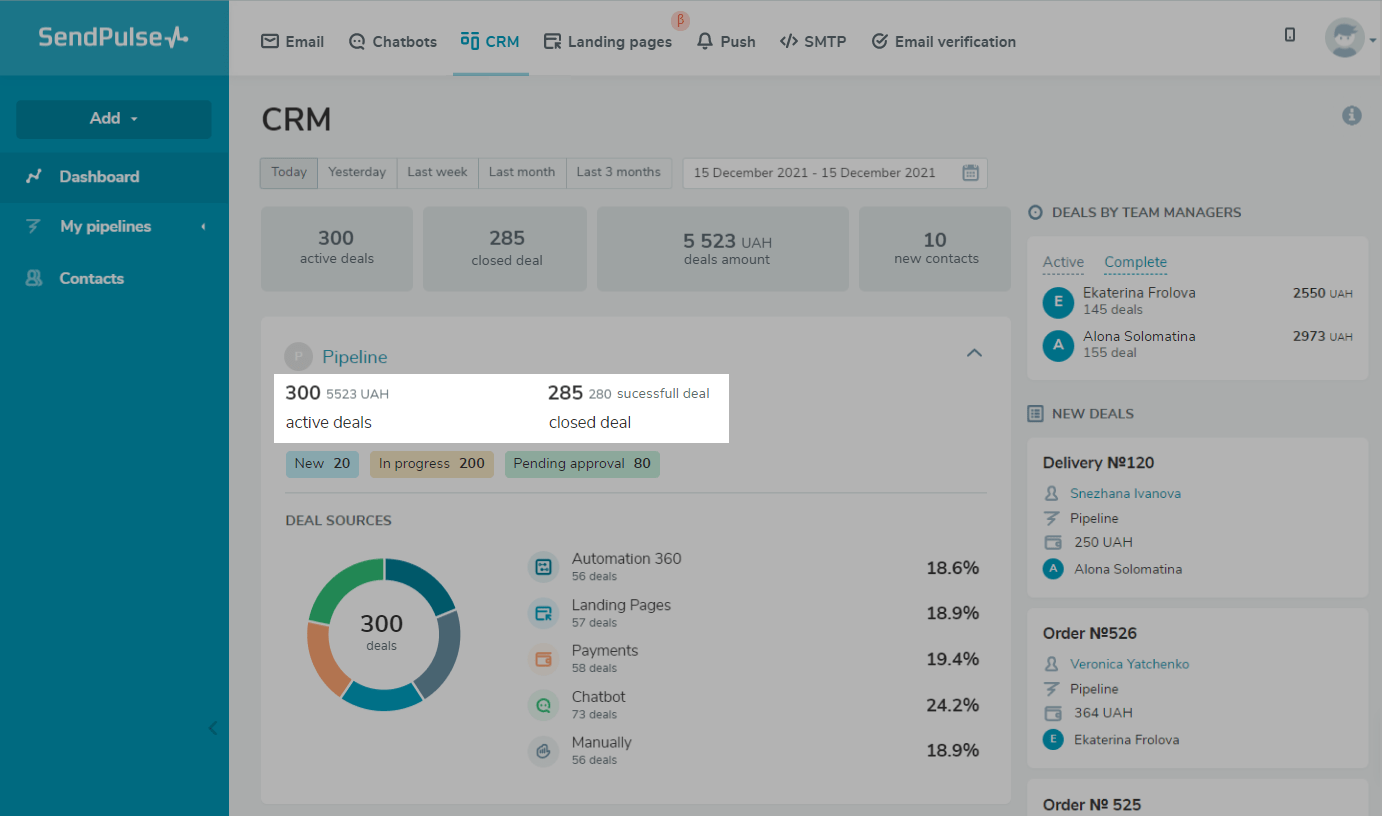 Here you will also find the number of deals for each deal stage. 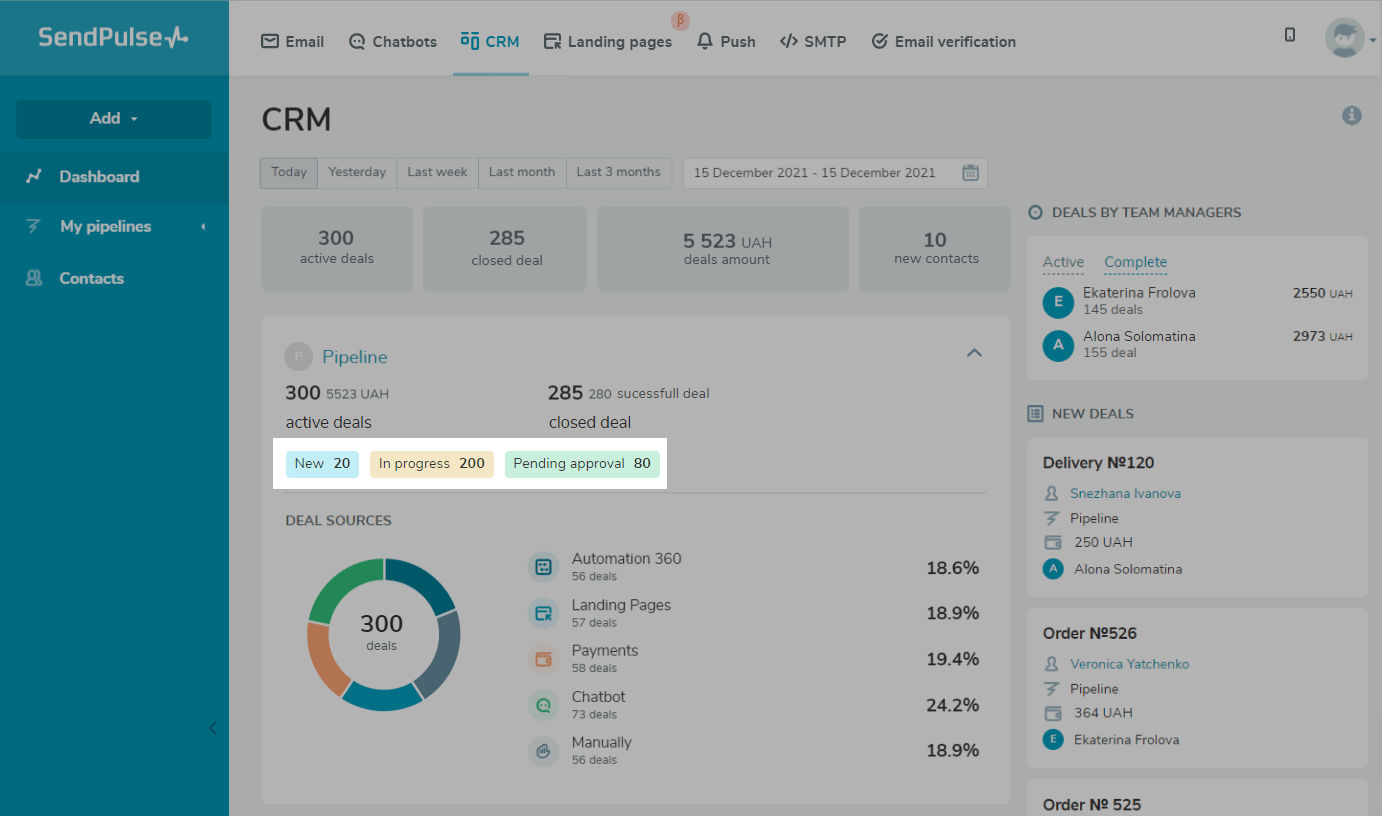 Pie charts are also available to show the sources of adding deals.

The source of adding deals can be:

Automation 360 — deals were added when the contact went through the "Action — Create Deal" element in A360.

Manually — deals were created manually in the "Deals" section of the CRM.

Landing pages — deals were added when the visitor signed up through the subscription form created in the SendPulse landing pages builder.

Payments — deals were added after making a payment in the chatbot or landing page.

Chatbot — deals were added when the user went through the "Action - Create Deal" element in the chatbot.

Forms — deals were created when the contact signed up through the subscription form created in the SendPulse form builder. 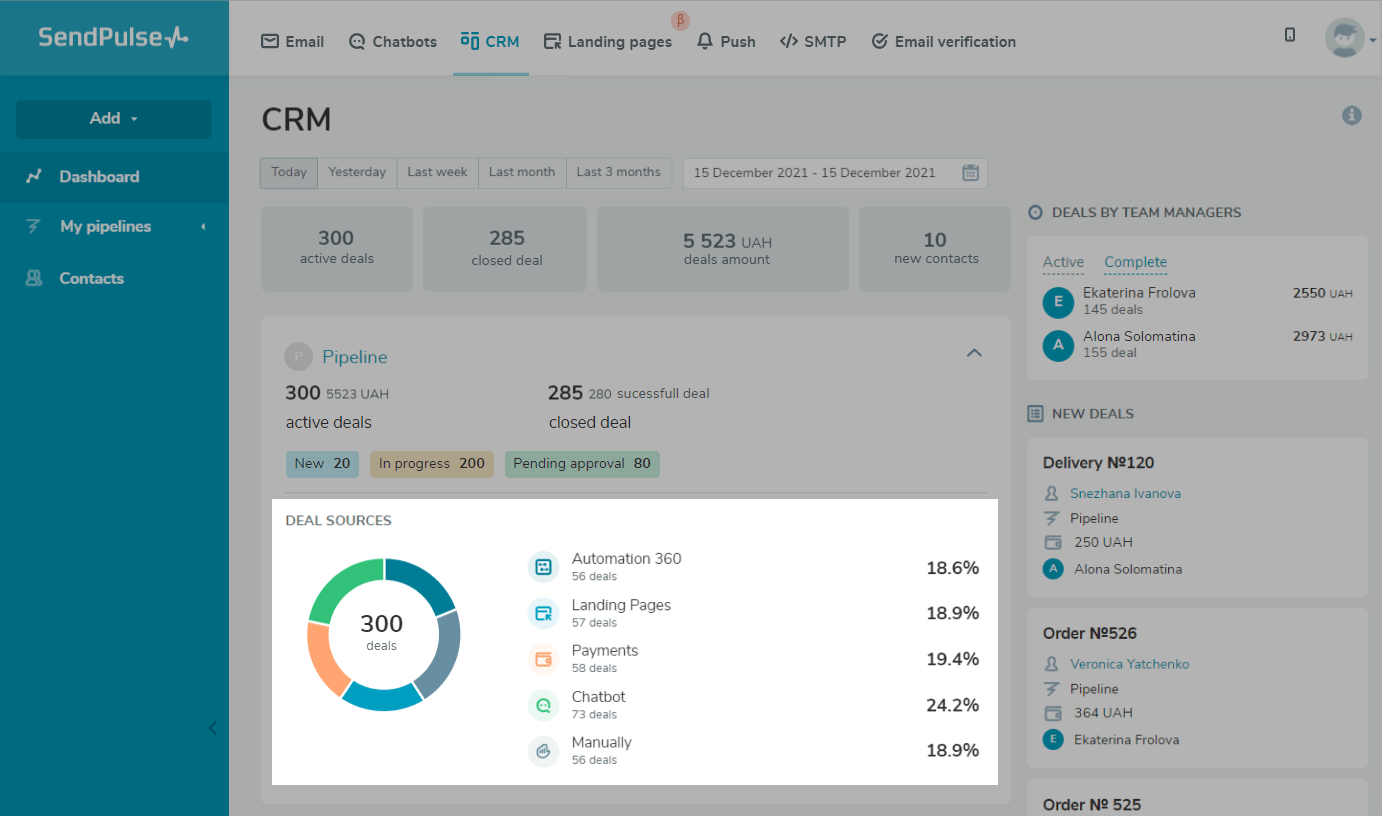 You can see the number and monetary amount of deals for each team member on the right.

To see active and completed deals switch between the "Active" and "Complete" tabs. 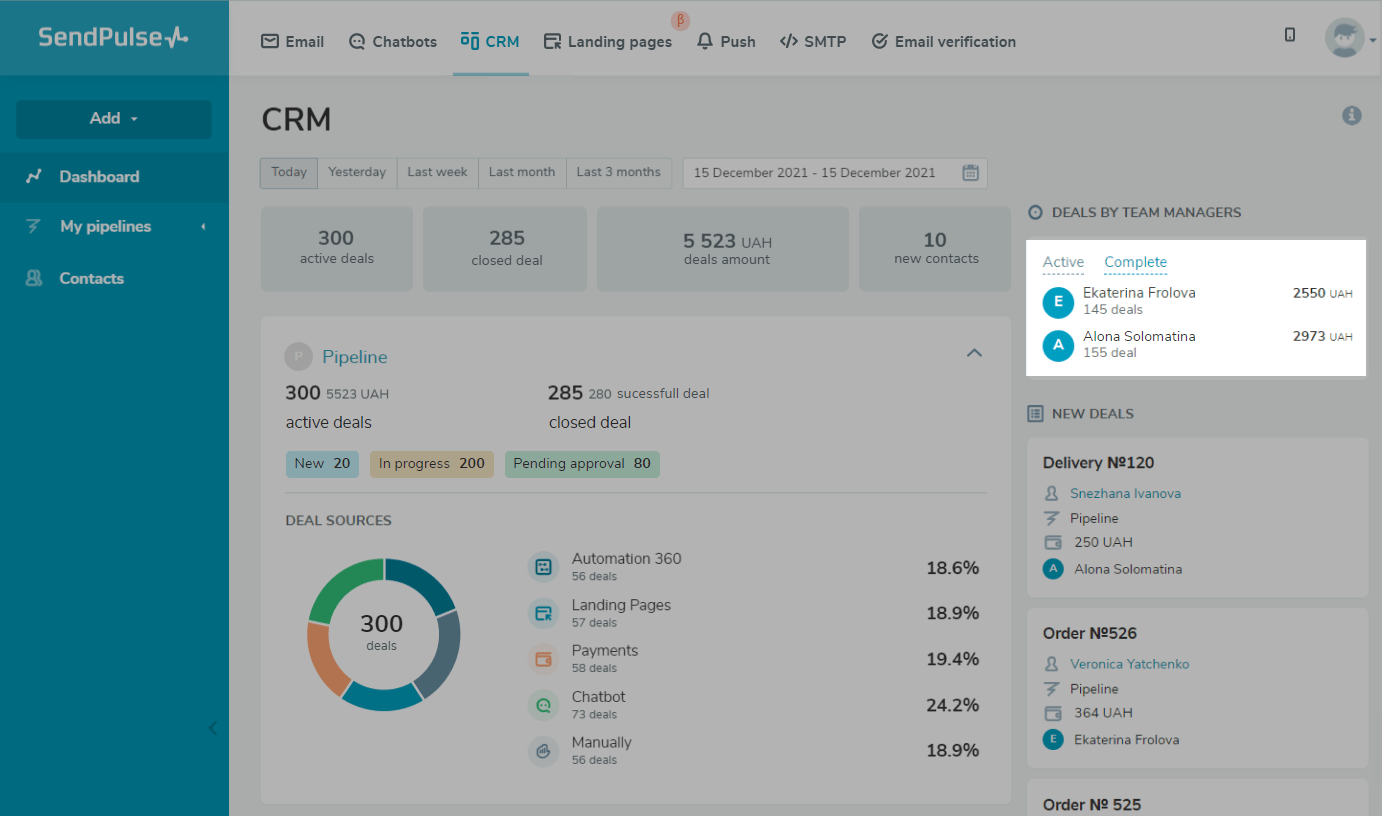 In the "Tasks" section, you can view your task statistics in three tabs: "Overdue," "Today," "Important."

The "Overdue" tab includes tasks with expired due dates.

The "Today" tab includes tasks that are due today.

The "Important" tab includes tasks that are due today and are of high or medium priority.

Tasks due in the future do not appear in this field.

Read more: How to Create a Task, How to Work with Tasks. 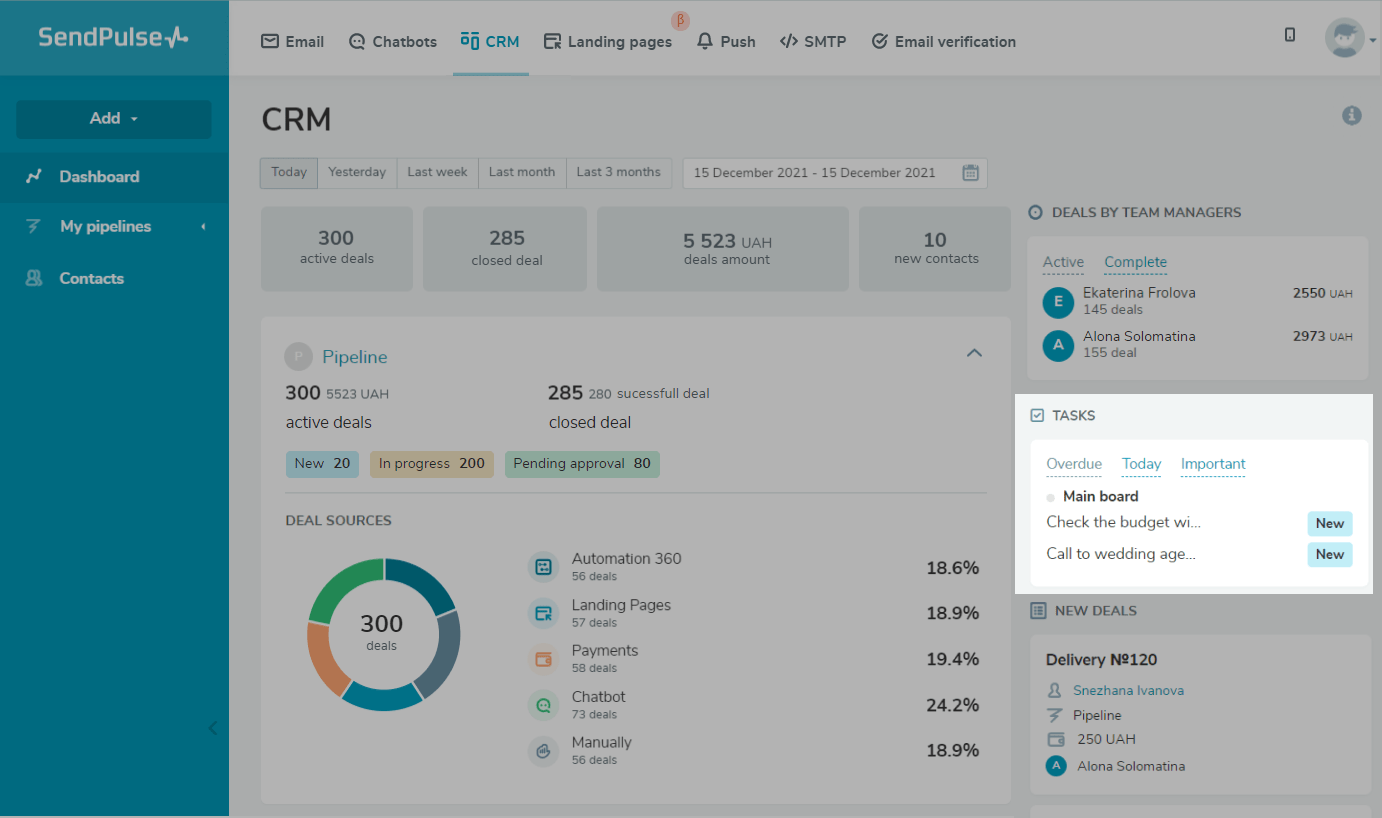 Click on a task name to go to its card.

On the same page, you can view all of your recently created deals. The deal card displays the pipeline name, the number of the deal, and the team member responsible for the deal.

Please specify the reason for your vote

Rate this article about "How to View CRM Statistics"

Popular in Our Blog

Your promo code is invalid

Looks like you already have an account. Please email us at support@sendpulse.com if you think this is an error.